skip to main | skip to sidebar

Now, as an Asian, naturally ANY karaoke is going to be great time for me. It's a little known fact that Karaoke is a Japanese word meaning "Asian guy singing Elvis songs."

However, this enjoyment is multiplied ten-fold when it's karaoke done to a LIVE backup band. Guitar Hero is great and all, but this is the way to REALLY feel like a rock star.

Plus, it's typically cheaper than regular karaoke - no per song charge, no room charges. You just have to wait your turn. Sometimes there's a cover charge, but often not.

There are three main live karaoke bands in the city to look for: 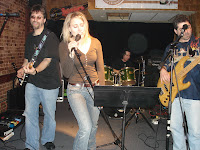 The Human Karaoke Experience:
This is a great place for live karaoke beginners. They're a super cool and relaxed trio with a mind-blowing playlist of 500 songs! Pick out your songs from their website and get to their events early as they have a hardcore group of regulars that always get there and fill up the first couple of pages rather quickly. Put your name down in the earliest slot available, then once on each of the next pages if you want to sing several songs during the night. They play in multiple venues so check their website for a schedule - I've gone to see them at O'Flanagan's Pub on 1st Avenue between 65th and 66th Streets. They serve food there too; I heartily recommend the O'Flanagan Burger for $9.95. Great size and quality of beef, with swiss cheese, mushrooms, onions and sour cream, and decent thick and dirty fries. Drinks aren't quite cheap: Gin and tonics are $6, beers are $7, but I don't drink so take THAT "the MAN!"

The grand daddy of all live karaoke bands and NOT for the faint of heart. Formerly the house band for Arlene's Grocery's Monday night karaoke, they were rather unceremoniously bumped out of there in favor of one of their imitators. Arlene's loss, everyone else's gain. Then they played a regular gig at the Continental before that joint sold out and stopped hosting live music altogether. Now they play in multiple venues, primarily at Club Midway on Avenue B in the East Village. There IS a $5 cover, but it's worth it and the singing is free.

This is the hardest rocking live karaoke band in the city, with the band doing dead on renditions of a slew of heavy metal and punk rock covers, with nearly 250 songs in their playlist. The regulars can SING with a capital STFU, so make sure you're ready to leave it on the stage when you get up there. Again, get there early and sign up, as spots and songs fill up quickly. 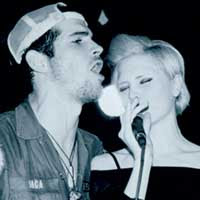 Rock and Roll Karaoke at Arlene's Grocery:
The band which replaced the aforementioned Punk Rock/Heavy Metal Karaoke band is competent, but feature a rather meager song list. Still, Arlene's is a cool venue for all you hipsters and scenesters, so throw on your best ironic couture distressed t-shirt and head on over there on Monday nights from 11pm-2am for their live karaoke rockfest!

The band also plays other venues from time to time, so check out their MySpace for schedule info.
Posted by Shyaporn at 12:38 PM

This blog is dedicated to living the frugal and single life. There are so many affordable and even free activities and opportunities for fantastic living here in New York City, and in every major city in the world!

Shyaporn
I'm an actor, writer and director living in New York City. This is just a blog of random thoughts and experiences in my life. For some of my work, check out my YouTube videos. My Homepage My YouTube Channel